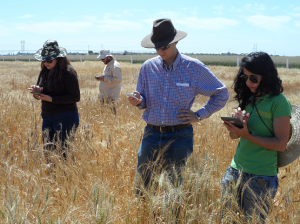 SeeD offers workshops on genetic diversity analysis, pre-breeding, and software tools will be offered free of charge several times a year, but space is limited, meaning that only a few researchers can be trained on SeeD’s data and technology each year.

“These modules will ensure that anyone can access and learn to effectively utilize our products, thus enabling the next generation of breeders and agricultural researchers in the tools that they will need to improve food security around the world,” Salinas said.

SeeD and CIMMYT’s first distance-learning module, which is hosted on the Moodle online learning platform, was developed by Laura Bouvet, a Ph.D. candidate at Britain’s University of Cambridge, working with the National Institute of Agricultural Botany (NIAB). Bouvet, who participated in a three-month internship with SeeD said she is very excited about the number of people the modules will reach.

The first module focuses on theory, introducing genotypic data, its importance for genetic diversity, how it is used, as well as the technologies that are used to generate and analyze the data. 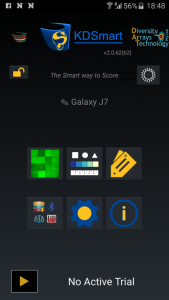 KDSmart, one of the subjects taught in the new SeeD distance learning modules.

The second module focuses on practice, guiding users through the process of using KDSmart, an Android based application to record phenotypic data, information on the physical traits of maize and wheat varieties. This module is being developed with the participation of several researchers from SeeD and the Genetic Resources Program led by Salinas.

The modules also include two videos created by Bouvet in partnership with SeeD and CIMMYT, one to explain the Seeds of Discovery project, and another to introduce the platform to show how the modules can help prospective users solve problems they may face in their research.

The modules are directed at postgraduate students, crop breeders, university faculty members, and researchers. Currently, the modules and videos are available only in Spanish language, but English versions will be developed in the near future to reach even more people interested in genetic diversity.

“These distance learning modules are for everyone who wants to learn about genetic diversity, which is crucial to increase crop yields and is one of several important solutions to tackle climate change,” Bouvet said. “With distance learning modules, SeeD will be able to reach many more people, so that those without the time or financial means to physically come to CIMMYT can still benefit from their workshops and learn to utilize genetic diversity.”

SeeD is a multi-project initiative comprising: MasAgro Biodiversidad, a joint initiative of CIMMYT and the Mexican Ministry of agriculture and rural development (SADER) through the MasAgro (Sustainable Modernization of Traditional Agriculture) project; the CGIAR Research Programs on Maize (MAIZE CRP) and Wheat (WHEAT CRP); and a computation infrastructure and data analysis project supported by the UK’s Biotechnology and Biological Sciences Research Council (BBSRC). Learn more about the Seeds of Discovery project here.