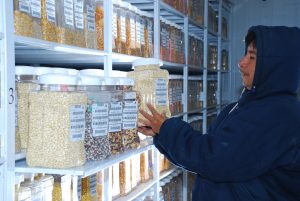 Mexico’s Secretariat of Agriculture (SADER) has invited scientists from the International Maize and Wheat Improvement Center (CIMMYT) working with the MasAgro Biodiversidad (known in English as Seeds of Discovery, or SeeD) initiative to present at COP 13 on their work to facilitate the use of maize genetic diversity, particularly through a collection of tools and resources known as the “Maize Molecular Atlas.” The presentations will focus on how resources that have been developed can aid in the understanding of germplasm stored in genebanks and collections to enable better use.

As the region of origin and as a center of diversity for maize, Mexico and Mesoamerica are home to much of the crop’s genetic variation. Thousands of samples of maize from this and other important regions are preserved in the CIMMYT germplasm bank, in trust, for the benefit of humanity. The 28,000 maize seed samples held in the bank could hold the key to develop the new varieties farmers may need to respond to challenges such as heat, disease and drought stress. However, information on the genetic makeup and physical traits of these varieties is often limited, making the identification of the most relevant samples difficult. 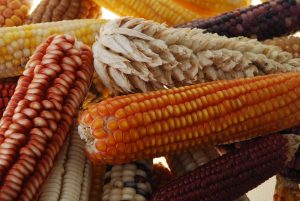 SeeD works to better characterize and utilize novel genetic diversity held in germplasm banks to accelerate the development of new maize and wheat varieties for the benefit of farmers. The initiative has generated massive amounts of invaluable information on the genetic diversity of maize and wheat, as well as cutting-edge software tools to aid in its use and visualization. These information and tools, freely available as global public goods, are useful to breeders, researchers, germplasm bank managers, extension agents and others, but are even more powerful when they are integrated with different types and sets of data.

Developed by the SeeD initiative, the maize molecular atlas brings together an unparalleled resource for those interested in maize genetic diversity.

“You can think of the maize molecular atlas like a satellite navigation system in your car,” said Sarah Hearne, a CIMMYT scientist who leads the project’s maize component. “Information that used to be housed separately, such as maps, traffic or the locations of police officers, gas stations, restaurants and hotels, are now brought together. It’s the same with the atlas. Having access to all of these data at once in an interlinked manner allows people to make better decisions, faster,” she said.

SeeD’s maize molecular atlas includes three main types of resources: data, such as maize landrace passport data (where it came from, when it was collected, etc.), geographic information system (GIS) -derived data (what the environment was like where maize was collected; rainfall, soils, etc.), genotypic data (genetic fingerprints of maize varieties) and available phenotypic data (information on how plants grow in different conditions); knowledge, (derived from data-marker trait associations; what bits of the genome do what); and tools, including data collection software (KDSmart), data storage and query tools (Germinate) and visualization tools (CurlyWhirly).

All of these resources are available through the SeeD website, where, when used together, they can increase the effective and efficient identification and utilization of maize genetic resources.

“With the atlas we now have the ability, with fewer resources, to interlink and query across different data types in one searchable resource,” Hearne said. This will allow breeders and researchers world-wide to hone in on the genetic and physical plant traits they are looking for, to more quickly identify and use novel genetic diversity to create improved varieties adapted to their specific needs. So far about 250 researchers and students from Mexico have participated in workshops and activities to begin using the new tools. With Mexico being a very important center of diversity for many species, agricultural and beyond, the same tools could be used for other species, here and abroad.

Hearne is looking forward to sharing MasAgro Biodiversidad and CIMMYT’s progress at COP 13, and is hopeful about the impacts the maize molecular atlas will have on biodiversity conservation.

“Conservation isn’t just preservation, it’s use. The molecular maize atlas enables us to better utilize the genetic resources we have, but also to better understand what diversity we may still need for our collection,” she said. “If you don’t know what you have, you don’t know what you need to preserve or look for. The work of the maize molecular atlas helps to address the underlying causes of biodiversity loss by raising awareness of the importance of these resources for sustainable food production while enabling researchers world-wide to use the information for assessing their own collections, and generate more diverse varieties.”

SeeD is a multi-project initiative comprising: MasAgro Biodiversidad, a joint initiative of CIMMYT and the Mexican Ministry of agriculture and rural development (SADER) through the MasAgro (Sustainable Modernization of Traditional Agriculture) project; the CGIAR Research Programs on Maize (MAIZE CRP) and Wheat (WHEAT CRP); and a computation infrastructure and data analysis project supported by the UK’s Biotechnology and Biological Sciences Research Council (BBSRC). Learn more about the Seeds of Discovery project here.