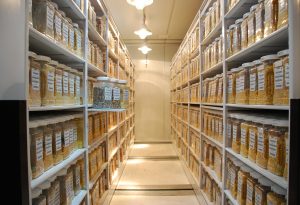 Maize collections held at the CIMMYT genebank in Mexico.

Public initiatives to facilitate the use of genetic resources must be promoted to demonstrate the value they add to agriculture for development and food security research, says Kevin Pixley, director of the Genetic Resources Program at the International Maize and Wheat Improvement Center (CIMMYT).

Pixley heads the Seeds of Discovery (SeeD) initiative at CIMMYT through which scientists are working to unlock novel, or new, genetic diversity held in germplasm banks – often popularly known as gene banks – to accelerate the development of maize and wheat varieties that grow better under environmental pressures like erratic weather and water scarcity, as well as provide increased nutritional value. CIMMYT scientists do this by identifying crop varieties that display valuable traits like drought and heat-stress tolerance that allow them to flourish despite these stresses.

Greater accessibility can also increase the breadth of impact due to research results being freely available to all, said Pixley who will speak at the Agrobiodiversity Congress on Nov. 7, in New Delhi.

“By characterizing the genetic makeup of maize and wheat collections, SeeD has generated ‘fingerprints’ describing the diversity of two of humanity’s major food crops,” Pixley said. “To multiply the impacts of these results, SeeD has created a genetic resources utilization platform for breeders and researchers, made up of publicly available data and software tools.”

Since the project began in 2012, it has detailed the genetic makeup of over 110,000 maize and wheat samples, sharing information with institutions in Africa, Latin America and South Asia to aid in developing disease resistant, drought tolerant germplasm with improved nutritional and quality traits.

Pixley, who will discuss the importance of public initiatives in the conservation and facilitation of genetic resources in, shared some insights on the role of agrobiodiversity in the effort to achieve food security in the following interview.

Q: What do you hope to contribute by your talk?

We’ll present the SeeD initiative as a unique example and model of a public initiative to characterize and facilitate the use of genetic diversity to address agricultural production challenges of today and the future. There is tremendous value in executing such a project in the public domain; for example, 1) the benefits from a one-time investment are shared, thus saving the costs of multiple individual efforts, 2) the knowledge gained is freely available, thus reducing the likelihood that individuals will seek exclusive rights to any discovery, and 3) equitable access to the benefits of genetic diversity is actively promoted by sharing results, tools and methods with individuals and institutions large and small.

Q: What is the importance of protecting genetic resources for global food security and health?

Dozens of instances are known in which crop wild relatives or landraces have provided essential genes for disease or pest resistance, abiotic stress tolerance or quality traits in such crops as wheat, rice, tomato, potato, sunflower and maize.  As world climate is changing and resources available for agriculture – such as arable land and water for irrigation – are declining, crops will be challenged by predictable – such as heat and drought – and unpredictable – such as new diseases and pests – stresses. Our future food security will undoubtedly be enhanced by, and may indeed be dependent on the use of genetic diversity conserved and made available through germplasm banks.

Q: What would you like to see come out of the conference?

I’d like to see the advancement of the conversation about the importance of conservation, sustainable and equitable use of genetic resources. There are diverse views about how humanity should share the responsibilities, costs and benefits of conserving and using genetic resources. This is a complex conversation with scientific, social, cultural, economic, and ethical dimensions. This is a conversation that may determine the very survival of future generations, and it is therefore of vital importance to society.